For a decade, I’ve tracked the contours of open data, digital journalism, open source software and open government, publishing research on the art and science of data journalism that explored and tied together those threads.

This week, I’m proud to announce that a new book chapter on open data, journalists, and the media that I co-authored with data journalism advisor Eva Constantaras has been published online as part of “The State of Open Data: Histories and Horizons!”

We joined 43 other authors in a 18-month project that reflected on “10 years of community action and review the capacity of open data to address social and economic challenges across a variety of sectors, regions, and communities.”

The publication and the printed review copy I now possess is the end of a long road.

Back in January 2018, I asked a global community of data journalists, open government advocates, watchdogs and the public for help documenting the “State of Open Data” and journalism for a new project for Open Data for Development. While I was at the Sunlight Foundation, I seeded the initial network scan on journalists, media and open data.

Over the past year, people and organizations from around the world weighed in – & Eva Constantaras joined me as co-editor & lead author, creating a “network scan” of the space. The writing project traveled with me, after I left Sunlight, and over this winter we edited and synthesized the scan into a polished chapter.

The book was originally going to be introduced at the 5th International Open Government Data Conference in Buenos Aires, in the fall of 2018, but will instead be officially launched at the Open Government Partnership’s global summit in Ottawa, Canada at the end of May 2019.

The book, which was funded by the International Research Centre and supported by the Open Data for Development (OD4D) Network. As a result of that support, “The State of Open Data” was also published in print by African Minds, from whom it may also be purchased. (While I was paid to edit and contribute, I don’t receive any residuals.)

Last night, I joined Tim Davies and other authors at the OpenGov Hub in DC to talk about the book & our chapters. Video of Davies, who managed to cover a tremendous amount of ground in ten minutes, is embedded below.

Thank you to everyone who contributed, commented and collaborated in this project, which will inform the public, press and governments around the world.

On May 10, the Select Committee on the Modernization of Congress in the United States House of Representatives held a hearing on “opening up the process,” at which 4 different experts talked with Congress about making legislative information more transparent,” from ongoing efforts to proposed reforms to the effect of sunshine laws passed decades ago. 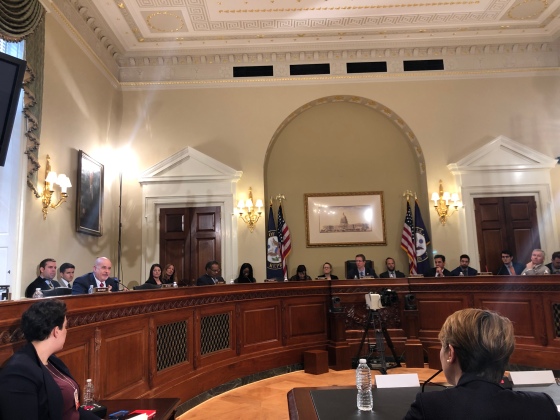 If you’re not up to speed on this committee, it was established on January 4, 2019 the House voted in favor of establishing the Select Committee by an overwhelming margin (418-12) by adopting of Title II of H.Res.6, the Rules of the House of Representatives for the One Hundred Sixteenth Congress, with a sole authority of investigating, studying, holding public hearings, making finding, and developing recommendations to modernize Congress – but no legislative jurisdiction nor ability to take legislative action. The committee has has been fairly described by IssueOne as “the best opportunity in decades” for Congress to improve itself, by looking inward.

The two hours of discussion on May 10 mostly added up to good news for good government, with useful summaries of progress opening up Congress to date from the deputy clerk of the House, proposed recommendations and reforms from GovTrack founder Josh Tauberer and DemandProgress policy director Daniel Schuman that would build on that progress, and some skepticism of sunshine in the legislative process from University of Maryland professor Frances Lee.

I attended the hearing and tweeted from it, as has been my practice for nearly a decade in DC:

The thread of tweets above, however is not meant to be comprehensive, nor could it be fully contextualized in the moment. For that, watch the hearing on YouTube, in the video embedded below:

…and read a summary of the hearing from the Congressional Institute, reporting from Federal Computer Week on “transparency through technology” and Roll Call on ongoing development of an “artificial intelligence engine” (applying machine-learning to structured legislative data), and the latest edition of Demand Progress’ First Branch Forecast, in which Schuman summarizes his testimony and aspects of the hearing.

He and Tauberer recommended from appointing a legislative branch Chief Data Officer, releasing structured data that would feed into the clerk’s tool to show how proposed amendments would change bills, and enact a mandate and open standards for a unique identifier for lobbyists across the U.S. government. Whether those ideas make it into the committee’s recommendations remains to be seen, but they’re worth weighing – along with further studying of the value or risk of increasing or decreasing public access to various aspects of the deliberative processes that constitute legislative and oversight activities.

On a meta note, the process on display at this forum was notable for comity between witnesses and members, openness to the public and press, and engagement online.

The medium is still the message, when it comes showing (not telling) how open a given institution is.

While paying attention to the digital component has become downright mundane in 2019, the Committee demonstrated admirable competence, streaming the hearing online at YouTube, publicized it on social media prior to the event, engaged with the public during the hearing, and published testimony on its website afterwards. (Unfortunately, there’s no text transcription of the hearing on the hearing page. Given the committee’s acknowledgement of the importance of accessibility, it should make sure to get transcripts online.)

As at the most recent “Congressional hackathons,” Members of Congress were able to show good government, ethics and transparency, far away from partisan rancor over white hot political issues or Congressional attempts to conduct constitutional oversight of a corrupt administration.

If you’re interested in following the activities of the committee or providing feedback, visit Modernizecongress.House.gov and scrub in: the People’s House will only be as open, accessible, accountable, and effective as we make it – or demand it to be. There’s no one else coming to help.