Livestreaming is not new to American politics in 2019. presidential candidates started using uStream in 2008. But it is much easier than ever before. Recent advances in smartphones and wirelesss Internet access have radically improved the capacity of politicians and … END_OF_DOCUMENT_TOKEN_TO_BE_REPLACED

In March 2018, three public policy scholars posted a provocative question: could the open government movement shut the door on freedom of information? At the time, I let it flow without refuting it from the Sunlight Foundation’s platform, but it’s … END_OF_DOCUMENT_TOKEN_TO_BE_REPLACED

Back on December 21, 2018, the United States Congress sent the Foundations for Evidence-Based Policymaking Act of 2017 to the President’s pen in a historic win for open government in the United States of America.

Two canonical principles for open, digital government in the 21st century are now the default in the United States:

As I’ve said before, this reform represents “a genuine opportunity to not only improve how the nation makes decisions but embed more openness into how the federal government conducts the public’s business.”

This is a historic, bipartisan win for open government data, after years of trying. It is a milestone for the open movement, codifying core principles into code.

Thank you to all of the advocates, legislators, watchdogs and journalists who played an essential role in making open government data the law of the land. 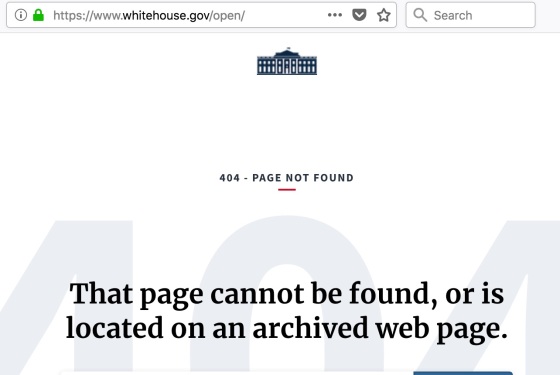 When the Trump administration committed to participating in the Open Government Partnership in September 2017, it surprised watchdogs and transparency advocates. When it delayed releasing a new plan one month later, it came as no surprise, given the administration’s clouded record in its first year and regression on anti-corruption programs, reforms, and policies.

The White House Office of Management and Budget has been silent for four months after it missed a second, key deadline for submitting new United States National Action Plan for Open Government for the Open Government Partnership after it convened workshops and an online forum in 2017 and 2018.

The leadership of the Open Government Partnership has now confirmed that the United States is under review after it has failed to deliver commitments in good faith for two years.

“Having failed to submit an Action Plan by 12/31, the US will automatically be placed under ‘Review’ for procedural violations,” tweeted Nathaniel Heller, co-chairman of the Open Government Partnership. “That Review process can ultimately lead to being rendered ‘Inactive’ in OGP, or resolved with the eventual submission of a NAP in the coming months.”

In followup tweets, Heller clarified that there is now a strong precedent that, if a country fails to deliver the NAP during the Review period (here, Aug 2019), the Steering Committee would be very likely to agree to inactivity.

Aidan Eyakuze, co-chairman of the OGP Criteria and Standards subcommittee, clarified the next steps in a 5-part series of tweets, which add up to the following statement, condensed.

The consequence of missing the deadline are unclear.

On the one hand, the shadowed record on good government and “information darkness” of the Trump administration and has been well-documented by journalists and nonpartisan watchdogs. On the other, Republicans still believe that this is an open and transparent administration.

“In the summer of 2018, an increasing proportion of the American public now tells Pew Research that President Trump “has definitely or probably not run “an open and transparent administration.” But there also has been an increase in the proportion of people who think that Trump definitely has done so, likely in part because the president has made that claim repeatedly.

In fact, in 2018 more Republicans now say Trump has run an open and transparent administration, over a time period when his administration’s record on open government if anything, grew worse in its second year: secretive, corrupt, hostile to journalism and whistleblowers, mired in scandal, shadowed by foreign entanglements, and characterized by false and misleading claims made to the public by a president whose tangled relationship with the truth is unprecedented in American history.”

As with President Trump’s corruption, his administration’s failure to deliver a new plan for open government and commit to democratic governance should speak for itself.

But in our age of partisan polarization and presidential disinformation, the news that the Trump administration failed to deliver new commitments on open government is likely to be dismissed by supporters and buried behind the President’s prime time address on immigration tonight, particularly if he invokes the emergency powers of his office. The public deserves better.