There are roughly 1,361 .gov domains* operated by the executive branch of the United States federal government, 700-800 of which are live and in active use. Today, for the first time, the public can see how many people are visiting 300 executive branch government domains in real-time, including every cabinet department, by visiting analytics.usa.gov.

According to a post on the White House blog, the United States Digital Service “will use the data from the Digital Analytics Program to focus our digital service teams on the services that matter most to the American people, and analyze how much progress we are making. The Dashboard will help government agencies understand how people find, access, and use government services online to better serve the public – all while protecting privacy.  The program does not track individuals. It anonymizes the IP addresses of all visitors and then uses the resulting information in the aggregate.” 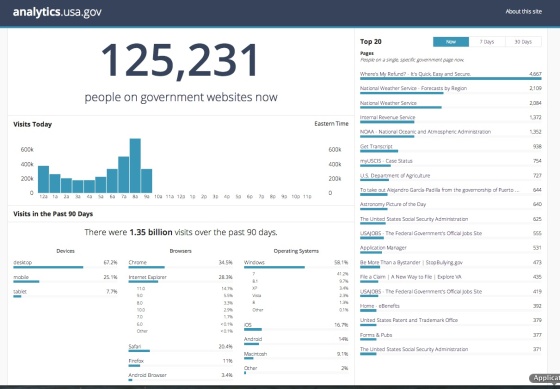 Former United States deputy chief technology officer Nick Sinai is excited about seeing the Web analytics data opened up online. Writing for the Harvard Shorenstein Center, where he is currently a fellow, Sinai adds some context for the new feature:

Here’s what we’ve already learned from the data:

If you have ideas, feedback or questions, the team behind the dashboard is working in the open on Github.

Over the coming months, we will encourage more sites to join the Digital Analytics Program, and we’ll include more information and insights about traffic to government sites with the same open source development process we used to create the Dashboard. If you have ideas for the project, or want to help improve it, let us know by contributing to the project on GitHub or emailing digitalgov@gsa.gov.

That last bit is notable; as its true all of the projects that 18F works on, this analytics dashboard is open source software.

There are some interesting additional details in 18F’s blog post on how the analytics dashbard was built, including the estimate that it took place “over the course of 2-3 weeks” with usability testing at a “local civic hacking meetup.”

First, that big number is made from HTML and D3, a Javascript library, that downloads and render the data. Using open standards means it renders well across browsers and mobile devices.

Second, 18F made an open source tool to manage the data reporting process called “analytics-reporter” that downloads Google Analytics reports and transforms that data into JSON.

Hopefully, in the years ahead, the American people will see more than the traffic to .gov websites: they’ll see concrete performance metrics like those displayed for the digital services the United Kingdom’s Government Digital Services team publishes at gov.uk/performance, including uptime, completion rate and satisfaction rate.

In the future, if the public can see the performance of Heathcare.gov, including glitches, or other government digital services, perhaps the people building and operating them will have more accountability for uptime and quality of service.