Yesterday, I wrote up 15 key insights from the Pew Internet and Life Project’s new research on the American public’s attitude towards open data and open government. If you missed it, what people think about government data and the potential impact of releasing it is heavily influenced by the prevailing low trust in government and their politics. 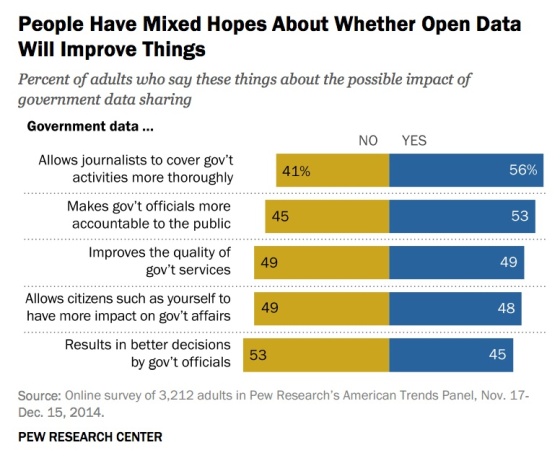 Media coverage of the survey reflected the skepticism of the reporters (“Most Americans don’t think government transparency matters a damn“) or of the public (“Who cares about open data” and “Americans not impressed by open government initiatives“). This photo by Pete Souza below might be an apt image for this feeling: 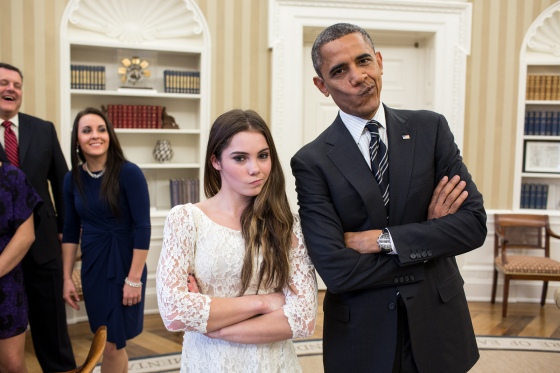 Other stories pulled out individual elements of the research (“Open data on criminals and teachers is a-okay, say most US citizens” or mixed results (“People Like U.S. Open Data Initiatives, But Think Government Could Do More” and “Sorry, open data: Americans just aren’t that into you“) or general doubts about an unfamiliar topic (“Many Americans Doubt Government Open Data Efforts“). At least one editor’s headline suggested that the results were an indictment of everything government does online: (“Americans view government’s online services and public data sharing as a resounding ‘meh’.) Meh, indeed.

As usual, keep a salt shaker handy as you browse the headlines and read the original source. The research itself is more nuanced than those headlines suggest, as my interview with the lead researcher on the survey, John Horrigan, hopefully made clear.

Over at TechPresident, editor-in-chief Micah Sifry saw a glass half full:

People are optimistic that open data initiatives can make government more accountable. But, many surveyed by Pew are less sure open data will improve government performance. Relatedly, Americans have not quite engaged very deeply with government data to monitor performance, so it remains to be seen if changes in engagement will affect public attitudes.

That’s something we at Sunlight hope to positively affect, particularly as we make new inroads in setting new standards for how the federal government discloses its work online. And as Americans shift their attention away from Congress and more toward their own backyards, we know our newly expanded work as part of the What Works Cities initiative will better engage the public, make government more effective and improve people’s lives.

Jonathan Sotsky, director of strategy and assessment for the Knight Foundation, saw a trust conundrum for government in the results:

Undoubtedly, a greater focus is needed on explaining to the public how increasing the accessibility and utility of government data can drive accountability, improve government service delivery and even provide the grist for new startup businesses. The short-term conundrum government data initiatives face is that while they ultimately seek to increase government trustworthiness, they may struggle to gain structure because the present lack of trust in government undermines their perceived impact.

Steven Clift, the founder of e-democracy.org, views this survey as a wakeup call for open data advocates.

One reason I love services like CityGram, GovDelivery, etc. is that they deliver government information (often in a timely way) to the public based on their preferences/subscriptions. As someone who worked in “e-government” for the State of Minnesota, I think most people just want the “information” that matters to them and the public has no particular attachment to the idea of “open data” allowing third parties to innovate or make this data available. I view this survey as a huge wake up call to #opengov advocates on the #opendata side that the field needs to provide far more useful stuff to the general public and care a lot more about outreach and marketing to reach people with the good stuff already available.

Mark Headd, former chief data officer for the City of Philadelphia and current developer evangelist for Accela software, saw the results as a huge opportunity to win hearts and minds:

The modern open data and civic hacking movements were largely born out of the experience of cities. Washington DC, New York City and Chicago were among the first governments to actively recruit outside software developers to build solutions on top of their open data. And the first governments to partner with Code for America – and the majority over the life of the organization’s history – have been cities.

How do school closings impact individual neighborhoods? How do construction permit approvals change the character of communities? How is green space distributed across neighborhoods in a city? Where are vacant properties in a neighborhood – who owns them and are there opportunities for reuse?

These are all the kinds of questions we need people living and working in neighborhoods to help us answer. And we need more open data from local governments to do this.

If you see other blog posts or media coverage that’s not linked above, please let me know. I storified some reactions on Twitter but I’m certain that I missed conversations or opinions. 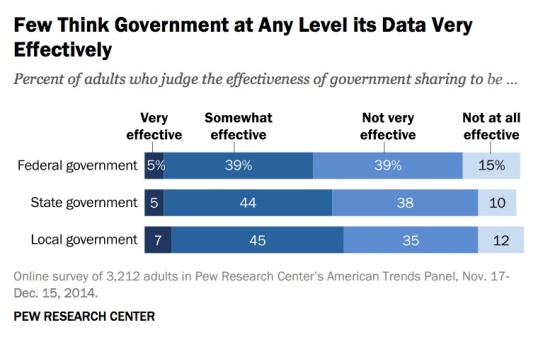 There are two additional insights from Pew that I didn’t write about yesterday that are worth keeping in mind with respect to how how Americans are thinking about the release of public data back to the public. First, it’s unclear whether the public realizes they’re using apps and services built upon government data, despite sizable majorities doing so.

Second, John Horrigan told me that survey respondents universally are not simply asking for governments to make the data easier to understand so that they can figure out what I want to figure out: what people really want is intermediaries to help them make sense of the data.

“We saw a fair number of people pleading in comments for better apps to make the data make sense,” said Horrigan. “When they went online, they couldn’t get budget data to work. When the found traffic data, couldn’t make it work. There were comments on both sides of the ledger. Those that think government did an ok job wish they did this. Those that thin government is doing a horrible job also wish they did this.”

This is the opportunity that Headd referred to, and the reason that data journalism is the critical capacity that democratic governments which genuinely want to see returns on accountability and transparency must ensure can flourish in civil society.

If a Republican is elected as the next President of the United States, we’ll see if public views shift on other fronts.

And after President @JebBush says "Ronald Reagan was the father of @Foursquare" on 1/21/2017…? http://t.co/e11502mCUZ pic.twitter.com/eUOsZHNYUr