Under President Donald J. Trump, the American government has moved back from being more open to more closed, as Congressional hearings and watchdogs have documented since January 2017.

The Trump administration has undermined trust in both government and the press. It has accumulated a historically bad record complying with the Freedom of Information Act, fighting disclosures in court, put forth a weak national open government plan after a failed public consultation, and secretly pursued an aggressive deregulatory agenda.

In sum, it is backsliding on a fundamental democratic principle: that a government of the people should make itself open, transparent and accountable to those people using the communications mediums of the day.

Unfortunately, that backsliding has also meant redacting, removing and deleting documents and data from the Internet, which is why I helped found and start up the Sunlight Foundation’s Web Integrity Project in 2017, an effort to track changes across the federal government’s public-facing digital infrastructure.

In that vein, this White House’s decision not to put up a new whitehouse.gov/open URL remains symbolic, as did its decision to stop disclosing visitor logs. (open.whitehouse.gov links to a disclosures page, but makes no reference to open government or associated activities across the federal government.)

To state the obvious, this is all far below the standard we should expect from the federal government.

This isn’t about just about tweeting out warmed over, copy and pasted propaganda or, even worse, attacking or undermining the press. Government agencies should be using the new digital tools of this moment — social media, websites, email newsletters, livestreams, chatbots – to engage the public in the business of government and inform us of how it is spending our money.

In fact, sunshine laws regarding public meetings and notice on proposed rules mandate some disclosure and engagement be baked into governance.

In 2019, the pillars of open government include transparency, accountability, participation, and collaboration, online and off.

We should expect to see our government agencies leverage the Internet and the technologies associated with it to enable a public spread across a vast continent and dispersed around the entire world to learn what our government is doing, when, how and where with a few taps or clicks.

If the agencies and the humans that run and maintain the institutions are investing in keeping digital resources, services, and databases up to date, we can get a byte closer to a more perfect union.

Agency open government pages, typically located at agency.gov/open, can and should be built to maximize the opportunities for the public to be informed and connected.

Simply forwarding /open URLs to Data.gov, as the FEC has in all of its footers, isn’t good enough. 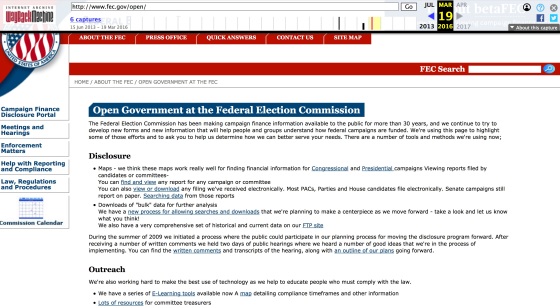 The Federal Election Commission should either restore its former open government page, or, even better, improve on it by integrating its Freedom of Information Act resources and much more.

So, what else should a good /open page have? Following is a draft list that offers some ways to build on the great legacy agencies have built. (Feel free to suggest more in the comments.)