…and we’re back! I will be writing at E-PluribusUnum again this spring, along with tweeting @ePluribusUnum. The following post was originally published on my personal blog, offering some insight into the last two years and what lies ahead. 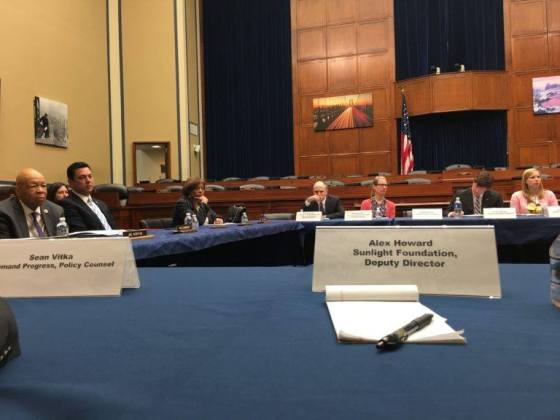 My last day at the Sunlight Foundation was this past Monday, April 30, just over two years since I joined. My final day in the office, in fact, was 12 years to the day after the nonpartisan nonprofit was founded, an Internet era ago in 2006.

I’m glad that the last interview that I sat down for was Episode 304 of Michael O’Connell’s excellent “It’s All Journalism” podcast, taped over at Federal News Radio, almost six years after I first joined his series to talk about open government.  I’ve learned a lot about fighting for truth and transparency in the interim, and plan to share more in the year ahead.

I have been incredibly proud to wear Sunlight’s pin on my jacket lapel and speak up for public access to public information around the world, from Congress and the White House to foreign capitols in Europe and South America.

I’m also incredibly grateful for the extraordinary opportunity to not only work on some of the most important democratic issues that we face as a nation and a worldwide community, from access to information and freedom of expression to human rights, but also to advocate for meaningful reforms that create the changes in the world we wish to see.

I’ve seen the projects that I created and nurtured at Sunlight drive national conversations and catalyze oversight, from acting as a transparency watchdog to  tracking Trump’s conflicts of interest and reporting on the corruption of this presidency, to the helping to nurture the development and launch of the Web Integrity Project after we started tracking open data takedowns. I talked with hundreds, if not thousands, of journalists about open government and civic technology. And I was proud to convene conversations during Sunshine Week , moderate debates and deliver keynote talks abroad.

I learned a lot about working with Congress as well, from Freedom of Information Act reform to the Open Government Data Act. I’m particularly proud that in 2017, after we called for political ad transparency online in the wake of the 2016 presidential election, U.S. Senators came to us and drafted the Honest Ads Act with us and Sunlight’s allies. In 2018, Facebook, Twitter and Google are all working on implementing versions of the disclosures and disclaimers that we called for, the bill remains in play in Congress, and states are drafting laws based on it. As a native of upstate New York, I couldn’t be more pleased that New York State passed the Democracy Protection Act, on which I worked with Cuomo’s legislative staff.

Government openness, transparency, and accountability matter now more than ever. I will continue to be an advocate in this space for these ideals and the maintenance of the laws that ensure public access, consent and participation aren’t an afterthought in governance. This isn’t just about the United States, but all of us. One of my favorite duties at Sunlight was to host and moderate discussions about open government around DC with delegations of foreign government officials, journalists and transparency advocates. I always learned more than I shared.

I hope that Sunlight will endure as a beacon for the public, press and open government movement around the world in the year ahead.

I’m going to continue to live and work on Capitol Hill as an independent writer, open government advocate, parent, neighbor, and engaged citizen. If you’re in DC this week, I may run into you at New America, for a discussion about online comments and good governance.

While I won’t be stepping offline or disengaging just yet, I also haven’t taken a proper vacation since August 2016, staying connected through the holidays and weekends of this unprecedented presidency — so that’s on the docket. I’ll share more about what’s next in the weeks to come.

Thank you to everyone who helped me to find my feet in April 2016 and has collaborated with me over the past two years.  I hope to see you soon.