On Tuesday, the U.S. House of Representatives will once again weigh reforming the Freedom of Information Act to improve how the most important open government law of the United States is honored.

The FOIA Reform Act,  authored by Rep. Darrell Issa (R-CA) is once again on the Congressional Calendar, with an additional 22 page report, H.R. 391.

According to government transparency advocate Lisette Garcia, an expert on FOIA law, the new FOIA bill (H.R. 653) was “heavily negotiated between both parties throughout the drafting stages.” She expects it to be considered in suspension of ordinary debate rules and fast-tracked with little opportunity for public input.

Garcia, who alerted us to the new bill text via email, said that Congressman Jason Chaffetz (R-CO) gave her an advance copy of the bill last December in exchange for her feedback as an experienced FOIA requester.

“Now is the time to register any objection or endorsement you may want to offer regarding any specific provisions,” she wrote.”Feedback to your representative, or any member of the Oversight Committee, may be submitted by calling the U.S. House switchboard at (202) 224-3121.”
That feedback matters because of the way that FOIA reform died in 2014.

Alert readers may recall that Congress was poised to enact historic Freedom of Information Act reforms in late 2014, only to see FOIA reform die as the press looked the other way and lobbying by the financial industry scuttled it at the last minute.

That was a huge loss for the public interest and a giant missed opportunity for public engagement around public access to public information.

Despite FOIA reform passing both Houses of Congress unanimously, the government transparency bill expired when federal agencies, including the Justice Department and the Federal Trade Agency, reportedly lobbied against the bill when it came before the House one final time and Speaker of the House John Boehner failed to put it on the legislative calendar.

The fiasco led press freedom advocates to criticize the Obama administration for failing to support making the same FOIA policy the President introduced and endorsed publicly in 2009 the law of the land.

Over the past several years, the Obama administration has committed and recommitted to modernizing how the federal government complies with the Freedom of Information Act for years.

On the one hand, there has been progress on a new website for requests and pilot projects for ‘release to one, release to all’ policies. The administration has also released  vast amounts of public data online and used technology to inform and engage the public in governance and science in unprecedented ways, from crowdsourcing and challenges to social media.

On the other, there’s a gap between what the Obama administration says about open government and how it follows through when informed members of the public ask tough questions.

The “presumption of openness” presented with such hope on the first day of President Barack Obama’s presidency in 2009 hasn’t led to the change that the public wished to see in 2016.

Researchers at the FOIA Project at Syracuse University found last week that there was a record number of pending FOIA lawsuits in 2015.

FOIA reform may face higher barriers to passing in the 114th Congress, but it’s more sorely needed than ever.

Here’s one way to give it some more attention. At the end of 2015, the Obama administration outlined 45 different ways it’s working to make the U.S. government more open and accountable to the people it serves.

If the White House intends to fulfill the open government promise it made in January 2009, President Barack Obama could start by adding a single sentence endorsing FOIA reform in Congress during his final State of the Union speech tomorrow night, making the “presumption of openness” law. 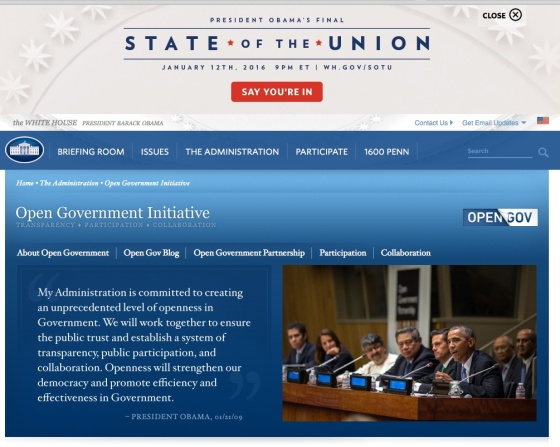 If President Obama still believes that he has led the “most transparent administration in history,” maybe it’s time to ask the public and Congress to make his public policies permanent so that the next inhabitant of the People’s House cannot easily reverse them.