A new report (PDF) from the Union of Concerned Scientists found some improvements on the freedom of government scientists to speak, including their use of social media, but that significant impediments to unimpeded access also remain. The report, which included the scorecard pictured below, was published during Sunshine Week, the annual celebration of the People’s right to know what government does on their behalf. According to the report:

“Progress has continued since the 2013 report, with a majority of agency policies now including key provisions such as the right to state personal views, whistleblower provisions, and a dispute resolution process. On the social media front, where five agencies in the 2013 analysis had no social media policy at all, that number in the 2015 report has shrunk to just one.

However, most agency policies still lack important provisions such as right of last review and access to drafts and revisions. And while nearly all the agencies now have social media policies, some of those policies are still vague or incomplete. Thus, there is still significant work to do.” 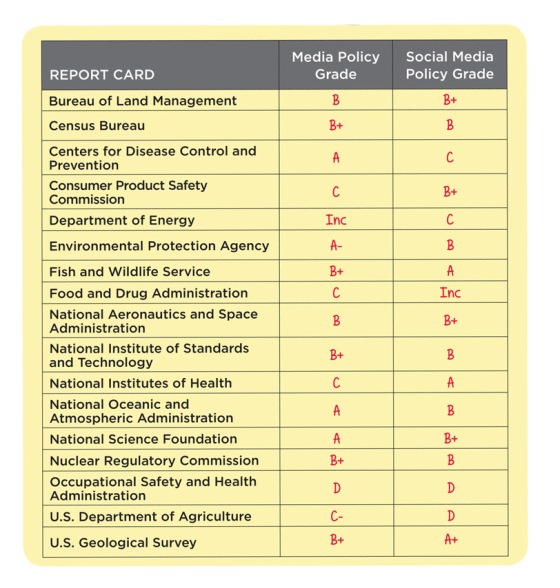 The accessibility of government scientists to journalists and the public has been a significant issue in the United States in recent years (and north of the border, in Canada), particularly in the context of climate science and other environmental issues. In September 2011, Columbia Journalism Review (CJR) published an extensive feature that found that, despite high hopes, President Barack Obama’s administration had failed to make science accessible. By 2013, there was some measurable progress in the relationship between the scientific agencies and the press, at least as measured by the 2013 version of the UCS report.

The importance of media and public access to government scientists will only grow in the years ahead as more government data is released online. It’s crucial for the press and the public to be able to contact the people who create, maintain and understand these databases when they create acts of journalism based upon them.

One thought on “UCS: Progress on public access to U.S. government scientists, but serious issues remain”