One of the most important bills for open government in the U.S. since the Freedom of Information Act of 1967 has passed the House. Now, attention goes back to the Senate.

In September, House Majority Leader Eric Cantor told me that he would bring the DATA Act to the floor for a vote.

The bill passed the U.S. House of Representatives 388-1 this evening. 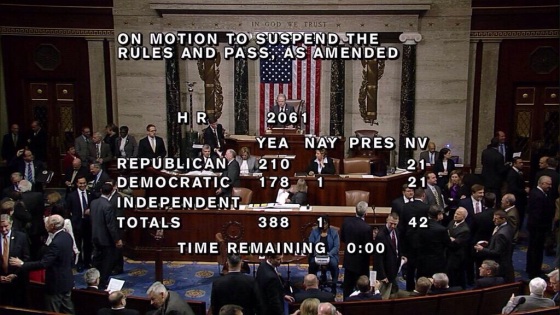 “The American people deserve a functioning government that is both open & transparent,” said Mr. Cantor.

“The DATA Act is an important step to achieving this goal because it will publish federal spending data and transform it from disconnected documents into open, searchable data for people to see and read through online.”

We’ll see what the full Senate votes on, if it’s brought to the floor, and what comes out of committee if it is passed.

“We are hopeful that the Senate will answer this call from the House of Representatives to reap the rewards from greater accountability and tech-sector innovation that real spending transparency can provide,” said Hudson Hollister, the Executive Director of the Data Transparency Coalition, in a statement.

“President Obama should put the goals of his Open Data Policy into action by publicly endorsing the DATA Act. As Comptroller General Gene Dodaro testified in July, without this legislative mandate, spending transparency won’t happen.”