Celebrating Sunshine Week is off to a good start in the nation’s capitol, but not without some shadows along the way.

Good morning from DC! #SunshineWeek is here, & I’m headed into a National Freedom of Information Day Conference. https://t.co/HTrKUjgoTo It will be the last #FOIDay at this @Newseum location. #FOIAFriday #opengov pic.twitter.com/gBokeFjHxH

So far, the public has heard robust defenses of the role of access to information and journalists in our democracy on a national Freedom of Information Day conference at the Newseum, and a forum on open government at the National Archives that included reflections from all three branches. I attended both events in person. I didn’t go over to the Justice Department, where Principal Deputy Associate Attorney General Jesse Panuccio gave a speech at the agency’s Sunshine Week kick-off, but I did hear that he criticized unnamed groups whose requests are “straining the system.”

“Some groups have turned FOIA into a means of generating attorneys’ fees or of attempting to shut down policymaking,” he said. ”Immediate litigation has become a feature of FOIA administration rather than a last resort, and the result is often that large and complex requests by institutional actors are moved, by court order, ahead of requests by average citizens.”

Here’s else what I saw, heard, and learned so far on Sunshine Week in 2019.

Good morning from DC! #SunshineWeek is here, & I’m headed into a National Freedom of Information Day Conference. https://t.co/HTrKUjgoTo It will be the last #FOIDay at this @Newseum location. #FOIAFriday #opengov pic.twitter.com/gBokeFjHxH

In an age where far too many politicians are attacking the press, it was a powerful benediction from a preacher’s son. The following text is a rough paraphrase of Cummings’ remarks, not an official transcript. You can watch video of the entire event, including his speech, on CSPAN, which is in of itself a great example of government transparency.

200 years from now, people will be reading about this period in history.

They will ask: when you saw the press being suppressed, a White House that blocked info from getting to people’s reps, a President who sent memos to career employees telling them they could not be whistleblowers, they’re going to ask what did you do? What did you do? Did you stand on the sidelines? Did you say it was someone else’s business? Did you write the story? Did you take a moment to write the editorial? Did you become fearful?

I view an attack on our press as an attack on all of us, and I will fight with everything I’ve got. And I want you to understand that I’ve got your back. I am the son of 2 Pentecostal ministers. In my house, a lie was a lie and the truth was the truth. We cannot allow fake information to become the norm. And you are the guardians of our freedom of the press. You are the ones who are in guerrilla warfare trying to get info out.

That’s why it’s so critical for Congress to protect your rights and people throughout the nation to get information through FOIA. People want to hold Trump accountable, but how can you hold him accountable if you don’t have information? If you have a secret meeting with Putin & no one knows about it?

Come on now: We’re better than that. If you block information, it’s impossible to have accountability. FOIA is critical to help the American people understand the decisions being made by their government. It is also crucial to understanding who is making those decisions and how they will affect their daily lives.

One of our top priorities this Congress is to investigate agency compliance with FOIA & evaluate how we can improve the law. “Never mistake a comma for a period.”

Things can always be improved upon. I hope Republicans will work with us in a bipartisan manner. It took us 3 years of hard work, with the help of many, & I thank you, & negotiation, & then with the help of Senator John Cornyn and Senator Leahy, we got it over the finish line. The FOIA Improvement Act is a prime example of how Congress can work together.

This week’s Freedom of Information hearing will have the EPA, Department of the Interior and The Justice Department. I invited The Justice Department because they’re in charge of ensuring compliance with the FOIA. In my opinion, they must do a much, much, much better job. At EPA, FOIA requests sent through political appointees and “Deep 6’ed.” Certain FOIA requests were deliberately delayed. That’s why Congress needs to conduct oversight, to shed a light. Secretary Ross will be coming before House Oversight to testify about how citizenship question was added to the 2020 Census.

As Oversight Chairman, my immediate responsibility is to do this kind of oversight. That work helps us to develop reforms for the future. You are so important. You are more important than you know.

I beg you to tear down any walls that might block you from getting info to the American people that they need to know. Stand up for strong FOIA law. Work with us. Don’t be silent.

I want our grandchildren to know that we stood up for this democracy. That we, all of us, had great respect for the people who created the Constitution. That we decided to be about freedom of the press & getting the information out. We are at a critical moment in our country’s history. I am so glad that you have been called to this moment to be the guardians of our information and the flow of our information.

Sunshine Week at the National Archives

Embedded below is a tweeted thread from the National Archives Sunshine Week event, including Judge Howell, discussion with federal FOIA ombudsman staff, and a livetweet of Senator Patrick Leahy’s comments. Video of the entire event is embedded above.

For anyone watching the @USNatArchives #SunshineWeek event, the US District Court for DC website is https://t.co/RKKtza9Oub. Here’s an interesting decision by Judge Howell, who’s speaking now: https://t.co/H2ODAtXL50 #opengov pic.twitter.com/raUfNBE5pY

The National Archives subsequently wrote about celebrating Sunshine Week on its website.

Leahy, who subsequently tweeted out a transcript of his remarks, observed that ”the list of threats to transparency under the Trump administration goes on, and expands far beyond just FOIA itself.”

“President Trump’s ongoing, opaque ties to his business organization make it impossible to know whether foreign governments and corporations are able to curry favor with him by spending money on his business,” the senator said. “The Trump administration has also issued an unprecedented number of lobbyist waivers to its appointees in secret – preventing the public from knowing whether Trump agency officials are simply continuing their advocacy on behalf of special interests in their official capacities.”

Senator Cornyn, a former judge and Texas attorney general, also spoke to the value of open government but not posted a transcript yet. He did tweet about his visit, stating that “Government transparency is the cornerstone of democracy. I’m proud to have passed the #FOIA Improvement Act and will continue to push for policies that ensure our government remains accountable to we the people.

As I tweeted from the event, I learned the FOIA was amended in 1974 to include sanctions against individual federal agency employees, as noted in this 2013 paper on enforcing the public’s right to access information, after Ralph Nader suggested it:

Fun facts I learned during #SunshineWeek:
1) FOIA was amended in 1974 to include sanctions against individual federal agency employees https://t.co/S4HcnQlvSM
2) @RalphNader suggested it
3) @TheJusticeDept @FOIAPost hasn’t ever sanctioned anyone#opengov https://t.co/zNjhvMlzwW

I also confirmed that the Justice Department hasn’t ever sanctioned any U.S. government officials or staff for violating FOIA under the amended statute. The fact that sanctions for violating government access laws are almost never applied at any level of government might shed some sunlight on why the state of compliance with public records laws not just in the US government but around the USA.

If FOIA officers and appointees faced fines or even jail time for obstructing disclosures under the law, we might see more of a normative shift towards the “openness by default” described in the FOIA statute. Unfortunately, the Department of Justice’s Office of Information Policy does not show any inclination to do more than encourage agencies to comply and praise those that do.

Sunshine Week in the People’s House 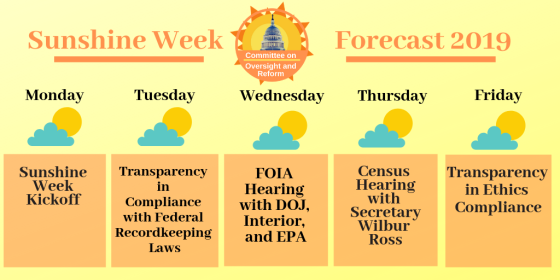 Earlier today, the Oversight Committee released a fact sheet that documents various aspects of the Trump administration record of secrecy.

Tomorrow morning, the public will see what Sunshine Week looks like in the House of Representatives, when the Oversight Committee holds a hearing on FOIA and transparency, followed by a  hearing with Commerce Secretary Wilbur Ross on Thursday “to determine why he and other Trump Administration officials gave misleading testimony about how the citizenship question was added to the Census, which has been deemed ‘unconstitutional and a violation of federal statute‘ by two federal judges.”

Whether more sunshine disinfects secrecy and corruption remains to be seen, but more public information about how public power is being wielded will inform both the public and their representatives in Congress. On Sunshine Week, that’s a good start.atch