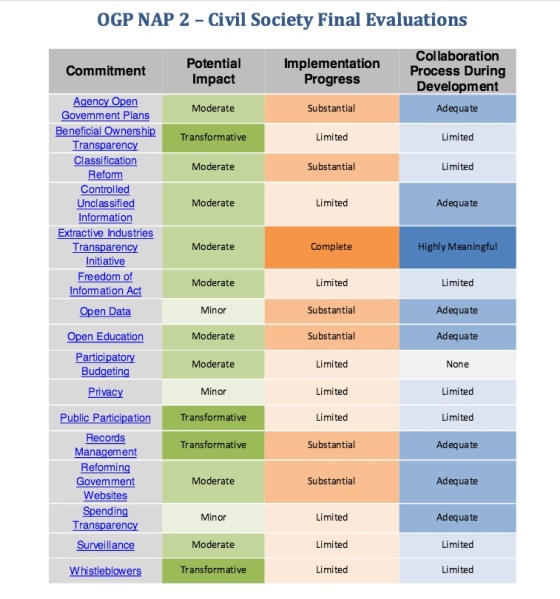 Today, OpenTheGovernment.org released a report of experts who evaluated how well the Obama administration has met its commitments to the Open Government Partnership in its second National Action Plan for Open Government. As you can see in the chart above, the researchers found only one commitment is fully met. Others, not so much.
What’s behind the hold up ? Here’s what the researchers suggested:

The possible explanations for why government agencies were unable to complete the initiatives varied across the evaluations. For example, the evaluation on the commitment to “Modernize the Freedom of  Information Act,” attributed the limited progress on this commitment to the lack of a strong mandate, absence of political will, and need for greater leadership. The evaluation of the commitment on transparency for legal entities noted “corporate opposition” as an apparent roadblock to that potentially transformative commitment. On the commitment to increase transparency of foreign intelligence surveillance activities, the lack of progress was discussed as possibly being a result of the complex challenges stemming from a deeply engrained culture of secrecy.
The lack of benchmarks and specific language is another commonly noted problem that emerges from this report. OGP guidance notes that governments should develop specific commitments and, where commitments have multiple sub-commitments, they should be broken into “clear, measurable milestones.” While the Civil Society Model Plan for the NAP 2 included detailed benchmarks and timelines for achieving measurable sub-commitments, these are generally not included in the U.S. NAPs.

Keep all of this in mind as The White House and federal agencies talk about new open government commitments.

I was asked to examine the administration’s progress meeting a commitment on the Freedom of Information Act — but failed to submit my own comments. As noted above, while the Obama administration made some progress on a new FOIA website, the Justice Department has so far failed to deliver better FOIA software — or, even better, an API for FOIA software vendors to build on. More problematically, the White House has been completely silent on Freedom of Information Act reform in Congress, despite language that mirrored the information policy that President Barack Obama and former U.S. Attorney General Eric Holder promulgated.

Those issues aside, the lack of progress on the potentially transformative commitments offers an opportunity for the Obama administration in its final year, as well as a set of idea that the presidential candidates could take up on the trail. Pushing even one of these through to completion by next January would be meaningful.
P.S. If you are a reporter covering the campaigns, please consider asking the candidates these  open government-related questions drafted by OpenTheGovernment.org and the American Society of News Editors (ASNE).